AKA. The longest, least charismatic film title in recent times. If it were me, 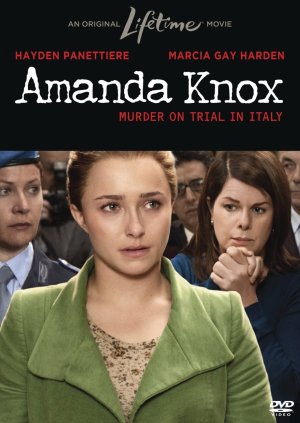 I would simply of titled it: Knox. Punchier, innit?

I’ve already conversed with Jillian about how hard I think it will be to review this, in that it does everything you need it to but just isn’t a) melodramatic or b) crap, enough.

But we’ll see. Like she assured me, we always manage.

*Spoilers!* – though that warning seems a little moot here, considering this is an extremely high-profile case, and most people and their dogs knows how the tale unfolded.

IMDB Synopsis: Based on the events surrounding the murder of British student Meredith Kercher.

Hm. I suppose I should preface this review with the fact that I was obsessed with this case when it first came to trial. Amanda “Foxy Knoxy” Knox is alleged to have murdered her roommate, Meredith Kercher in a brutal attack that may or may not have been sexually motivated (more details here).

I guess we may never know if she’s innocent or not, but Knoxy certainly maintains that she is, and has done so, ever since she was first arrested for the crime.

But to the film. Is starts off with Knoxy, standing outside her apartment with slightly seedy looking boyfriend, Raffaele Sollecito (slimey= obviously guilty). They are mumbling something to a cop about there having been a break in in the flat, broken glass and a wee bit of blood in the bathroom. Neither are particularly worried.

Obviously neither party have had the sense to check the rooms inside the apartment, as unbeknownst to them (allllllegedlllly!), the mutilated body of Meredith lies on the floor of her room, covered in a quilt.

NB: Actually, I think they may have tried but found Meredith’s room locked from the inside, so I’ll give them the benefit of the doubt on that one.

The slightly grouchy police officer tries to break the door down, while Knoxy makes a call to her mother in America, waking her in the middle of the night and worrying her sick for no good reason, IMHO.

I mean at this stage, she thinks someone has broken a window but not actually taken anything. I always wait for something a bit more concrete before I get my own mother involved, you know?

Raff also makes a dodgily timed phone call, speaking to the police about a break in, while the police are actually inside the flat, dealing with said break in. I’m guessing he doesn’t know about this new fangled thing called phone records.

Anywho, everybody present, including another housemate, is shocked to the core when Meredith’s door is bashed down and her body is discovered.

I best add here that I was painting watermelons on my nails while viewing this movie and so some of the back and forth may have been lost on me. Like whose fingerprints were on what and whom, etc. Forgive me.

Shortly after Kercher is found, Knoxy surprises everyone with her carefree attitude, which is  not very in keeping with a bereaved person. She’s seen kissing Raff with abandon in the police station just before giving her first statement and shopping for fancy knickers like a women with no worries, whatsoever. She tells police she was home with Raff having sex on ‘the night’.

Later Raff sells Knoxy up the river and tells the Polizia that she’d left to go out and didn’t return to his place until the morning. Based on this she is arrested.

She is interrogated a lot and in all the excitement it seems as though she has certain scenarios ‘suggested’ to her. She names her former boss as the man who took Kercher home that night and he is subsequently arrested himself.

Meanwhile, Mummy Knox flies into town and man, the Knox family seem nice. They are present every day of the trial and have to sit through Knoxy’s Trial by Media, during which she is ripped to shreds by the papers, TV and anyone who can, basically. Sadly, Knoxy’s apparent joy at being in the spotlight doesn’t really help her judgement. The girl does an awful lot of smiling and waving in the court house and boy, does that fuck people off.

The prosecution implies that Meredith strongly disapproved of this lascivious lifestyle, which caused a rift between the two women. Another dude is implicated in the murder along the way; Rudy Guede, who Kercher was supposedly seeing.

I’m sure it’s not ruining anything to say that Knoxy and Raff are found guilty and get sent down despite the fact there is little physical evidence to prove they’re involved.

It’s all just a wee bit dull TBH. Hayden Pantene is perfectly adequate as Foxy Knoxy, although I don’t think there’s much of a likeness, physically. I’ve always been quite a fan of HP, mainly because of Heroes, which I loved with a capital ‘L’.

Marcia Gay is also quite good as Knoxy’s distraught mother who somehow manages to hold it together, where most would not.

I think maybe I would have liked more of a build up to the crime, more insight into the two women together. Just more, I’m not sure exactly what though.

It’s an inoffensive take on the story, I suppose. The acting isn’t bad, the scenery is far from hideous and it did what it said on the tin.

That’s it really. Did I expect more wailing; more melodrama and more of a clue as to whether Knoxy really dunnit? Probs yes to all those things.

3/5 – Average. I mean, would it have hurt them to toss in a brief musical interlude?

Lifetime movies should be cheesy as fuck and there needs to be a law passed to ensure this.

So, what did Jill think? Check it out here shortly!