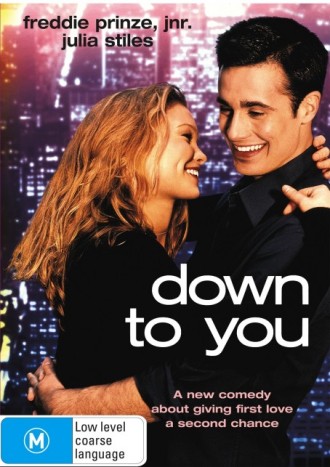 Jillian and I have sort of lost track of what theme we’re on, though we both think it’s still Romance. So this week’s pick is all about first love and stars a bevy of late 90’s/early noughties rom-com alumni. What’s not to like about that, right?

IMDB Synopsis: A young man wins and loses the first serious love of his life.

Al and Imogen fill us in on how they met, fell in love and then lost it all via the popular crap movie medium of talking into the camera.

Their story isn’t anything out of the ordinary: they meet at a party, where Imogen passes on the opportunity to go home with a skeevy boy called Jim Morrison (Ashton Kutcher with a very lustrous hair do). Instead she sets her sights on Mr. Cookie Cutter, Al and they bond over a love of singer-songwriting or something.

Anyway, they quickly fall into a relationship and are very happy, picking out a special song to be ‘theirs’ and doing cringe-inducing lip syncing scenes all over the college games room. All the stuff we’ve all done a million times as young, beautiful college students. Oh wait.

But as always, that old stinker reality kicks in and Imogen begins to freak out about how serious everything is and how old mannish Al has become (I think he wants to stay in on a Friday night ONE TIME, the old boring bastard). She dreams she is with child and I think there was a scene at some point where she takes a test. Thankfully she isn’t up the duff and celebrates by making a huge mistake that betrays Al’s trust forever (or is it forever really, hmmmmmm?).

She also shouts that she hates Al in the middle of a party which, frankly, was my favourite part.

Will these lovers ever find their way back together? Will Al actually do something of note instead of just standing around relying on his pretty face to do all the work for him (though he’s not my type AT ALL)?

Are Freddie Prinze. Jr and Buffy still married, and if so, is she now Sarah Michelle Prinze Jr? Are you still reading this? All I know is that this is a romantic comedy and all bets are off.

Throw in that short, quite good-looking guy from The Faculty (1998) (Shawn Hatosy), The World’s Hottest Woman™ and Ms. Blair; and the gang’s all here. But is this all-star cast good enough to raise this really rather light on storyline ensemble piece into classic rom-com territory?

I already know the answer to this, obvs but finding your own answer is Down to You, I guess. (LOOOOOOLLLLL)

FFS. Welcome to Dullsville, population: Me.

I went in with all the optimism of the Andrex puppy because as noted above, what honestly is not to love about this? It has all the ingredients of a movie to rival it’s contemporaries including; 10 Things I Hate About You, Never Been Kissed and She’s All That (all 1999) but you know why I think it doesn’t work? No gimmick.

Call me old-fashioned but if I want to watch a film about a relationship breaking down I can shut my eyes and reminisce over my past love life. Sure the cast isn’t as sexy but still.

This is supposed to be about how they find their way back together, of course but it needed way more oomph. I was bored out of my tiny mind. I didn’t care if they stayed together or not, I hated both Al and Imogen (and most of the secondary characters) and I just wanted it to end.

In fact, I wanted to stand up and shout “I HATE YOU!” to the TV and leave the room, it was that shit. Selma Blair, Ashton Kutcher and Rosario should have hijacked the film and made it all about them instead, that would’ve been infinitely better.

1/5 – the lowest rating yet. Even worse than Lizzie Borden. Oh, but the soundtrack was pretty good, I’ll give it that.

Head over to Jillian‘s shortly to find out what she thought!

4 thoughts on “Down to You (Film) Review”