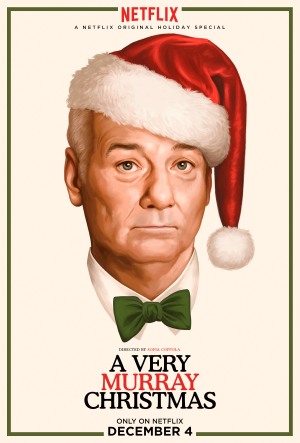 Our first foray into Crimbo programming this week and what better place to start than in Mr. Murray’s company, even if we find him a little down in the dumps?

Twitter has been awash with commentary on this film which I’ve tried to ignore. I’ve been looking forward to this ever since I saw the trailer.

Did it live up to hype, though?

Before we begin, the usual *spoiler alert*.

IMDB Synopsis: Bill Murray worries no one will show up to his T.V. show due to a terrible snow-storm in New York City.

This is going to be a hard one to review because really, it’s just Bill Murray and a few celebrity friends singing Christmas songs around a flimsy story line about being snowed into a bar in NYC. I think it’s snow, I wasn’t really concentrating. (Of course it’s snow, it says so up there in the synopsis!)

The lazy way to approach this would be to say, “Bill Murray is in it, so what’s not to like?” and then politely change the subject. Sure, he is and of course, he’s lovable and grouchy as always. He’s B. Murray, for God’s sake. As Jill says, “In Murray we trust!”.

But the truth is, it’s not nearly enough.

I am jumping the gun a little bit and launching straight into my thoughts and I need to hang back. I’m going to try to review as if it were a real film. Bear with.

Bill Murray has the Christmas Eve blues and if only he had a little ditty prepared to convey just how fucked off he really is. Oh wait. He also has a pianist ready in the wings, his trusty friend Paul Shaffer.

Bill is down in the dumps because the whole city is on lockdown, meaning his Christmas Special isn’t going to be that special after all, since nobody can get into town. The Clooneys of this world don’t do snow and it’s almost too much for B to bear.

Luckily for Mr Murray, he has a couple of pushy publicists, Liz and Bev (Amy Poehler and Julie White) who politely remind him the show must go on (because contracts). This does nothing to lift the mood but hey ho, this is Bill Murray and so they away to the bar downstairs to set up.

From what I can glean about the rest of it (I was playing The Simpson’s Tapped Out on my phone for the duration, what of it?), Bill convinces Chris Rock to sing with him, despite the fact he can’t sing; meets a couple whose wedding day has been derailed by the snow (Jones and Schwartzman) and reminds them, via the medium of song, why they fell in love in the first place.

He falls asleep and dreams about Miley Cyrus and George frolicking in a winter wonderland with the dancers from a Robert Palmer music video (oh wait, no that was Love Actually).

In fact, the gang sing a very dubious song about Santa wanting some loving and that’s after they’ve already done Baby, It’s Cold Outside, the festive equivalent of Blurred Lines.

Then Bill wakes up and that’s about it. There are cameos a go go and the highlight has got to be… well, I’ll tell you down there in the Thoughts section.

There aren’t many moments of drama in this bad boy, therefore no real need to build suspense with my Questions segment, but why not have a go, eh?

Will Bill ever smile? Will he win back that loving Christmas feeling he was so missing at the beginning? Will George turn up?

Also, what was the point in this, Sofia Coppola?

The highlights of this hour long ‘special’ are clear. Maya Rudolph (!) as The Lounge Singer is exquisite, fierce and funny – when she asks Jason S if he’s ever had a Soiled Kimono (a cocktail), I damn near lost it.

Jenny Lewis, as The Waitress (of Rilo Kiley) is superb and lovable, and best singer of them all, unsurprisingly. And then of course, when the whole thing finished. That was good.

It was pretty boring to be honest, nice to see some familiar faces and amusing in places but not great despite the cast, the director and the writing talent.

My Rating: 2.5/5. Maybe you’ll get more from it that I did, I hope so but I think I’ll stick with Hugh Grant’s embarrassing dad dancing, thanks.

What did Jillian think of this festive offering? Find out here.