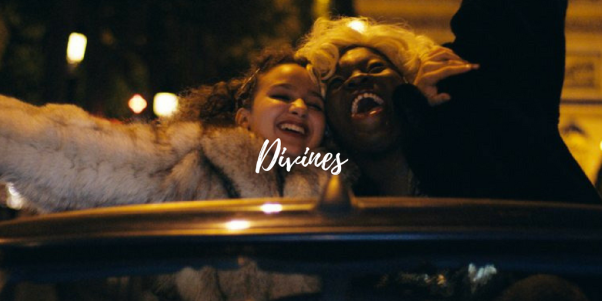 This is officially our first review of 2017 as the Great Blog Collab and how freaking dope is that? It’ll take me a while to recap on 2016 and all the films we covered, but I am very much looking forward to doing so.

So, do we have a clever theme for the first month of a brand new year? Not really. Personally, 10 days off work has turned me physically and mentally to mush, and so I wasn’t exactly firing on all cylinders when we started brainstorming.

We’ve decided instead to knock some titles off our wish lists so to speak. I don’t know about Jill but mine have started to pile up. Though sometimes I look at my to watch movies and wonder what the fuck I was thinking (Nicholas Sparks/Zac Ephron movies, really?).

A street teenager from a dysfunctional family from a banlieue (HLMs) in Paris comes across a young dancer who turns her life upside down.

Dounia (the mighty Amamra) lives in a poor part of Paris with her mother and aunt. Things are tight for the family and there’s some resentment between mother and daughter. No father on the scene, mother likes to party, that sort of dramz.

The only visible light in Dounia’s day it seems is her best friend, Maimouna (Lukumuena). Together the girls have a lot of fun, most of it mischievous and that’s all cool until bored Dounia quits school, vowing loudly and proudly to anyone who’ll listen that she’s going to go and make real money out there in the world.

Her key to this new life goal is Rebecca (Kalvanda), a seemingly cool and exotic local drug dealer. The girls find a way to impress a reluctant Rebecca, who first puts them to work on menial tasks, then enlists their help in the bigger stuff.  It is Dounia who really shines to Rebecca, and there are times a sort of mother/daughter vibe passes between them.

Can I get a moment here to address Djigui? He’s very hot but is he a good dancer? Maybe I’m missing the subtle nuances of his performance but his moves seem jerky and cringey to me. He actually gets on my nerves but well, Dounia likes him. Sort of.

Anywho, as the girls get in deeper with Rebecca, she predictably asks more of them, embroiling Dounia in a big bucks scheme to relieve a rich nightclub patron of his money money money. Dounia also makes a mortal enemy in Samir (Yasin Houicha), Rebecca’s jealous right hand man, who feels slighted by the change in hierarchy, particularly as it only seems to be working in Dounia’s favour.

Along the way, Dounia has proven herself to be tough and resourceful, however an altercation between her and Samir (and involving her own mother) threatens to bring the whole empire crashing down around them all, particularly when The Fuzz get involved. But, when presented with an opportunity to let something wholesome and good into her life, what’s a girl to do?

One violent night and Dounia thinks she has all the answers and the ticket to the life she always wanted but it’s never that simple is it? Something’s got to give, choices must be made and prices paid.

I’ll leave the ending to you guys.

Fucking hell. This film. IMHO we’ve started this year off on a massive high. I really enjoyed myself, riding every crashing wave with the girls. Throwing my own arms in the air at the highs, bawling at the crippling lows. It had me at ‘bonjour’, basically.

All the performances were top notch, it was violent where need be, yet not gratuitously and examined the topic of  burgeoning womanhood very nicely.

Both the lead girls were wonderful with an easy chemistry, you bought them as life long friends and comrades. There’s a scene where Maimouna promises Dounia she has her back (to paraphrase) that is just lovely. Some of their private fantasies betray the children that still lie within them, which serves as a stark reminder of what they’ve taken on to build a better life for themselves and their loved ones.

There are also religious undertones but they don’t really come into play, they’re just there, part of life, part of the threadbare community they occupy.

5/5. Incredible performances all round.

What did my beloved think of 2017’s first pick? Would she keep a look out for it, no questions asked or set fire to it instead? Find out here why dontcha?