The things I’m digging this week.

*Contains mild spoilers for Insecure & Game of Thrones, if you’re not up to date*

Award-winning filmmaker Dome Karukoski brings to screen the life and work of one of the most influential and celebrated figures of twentieth century gay culture.

This film is wonderful. Life-affirming, moving, inspiring and it’s done in such a tasteful way given its rather hardcore subject matter (not that that’s a requirement for me, obvs). It definitely has an art-house sheen to it but Karukowski sculpts his back story in such a way that you really become attached to the central protagonist, the titular Tom of Finland (played flawlessly, I thought, by Pekka Strang).

Support across the board is strong too, highlights for me being Tom’s sister, Kaija (Jessica Grabowsky) and Alijoki, Tom’s former Captain and friend (Taisto Oksanen).

If you can, try and catch this one, it’s lovely.

Well this film was a blast from start to finish, genuinely. I took myself to a late night showing last Wednesday and the tiny theatre they showed it in was packed. Every one of us was cackling with glee.

As well as being hilarious, this movie is touching in all the right places and invests you heavily in the female friendships. It’s also very sharp on white privilege. One of my favourite scenes is the one in which Ryan Pierce (Regina Hall) calls up her agent Elizabeth (Kate Walsh) on her use of African-American vernacular. She then says, of black event, Essence: “You’re a guest here, act accordingly.”

The whole cast is amazing, including Queen Latifah, Jada Pinkett Smith and stealer of almost every scene, Tiffany Haddish. I can’t wait to see it again. 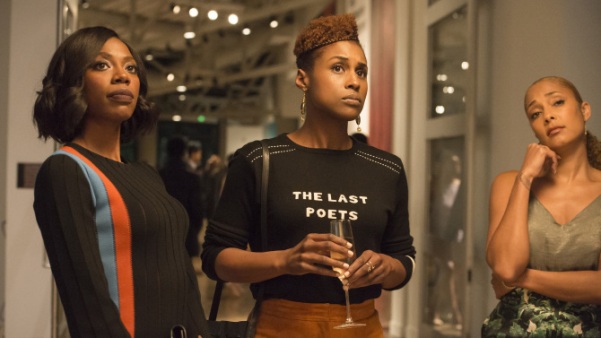 I’ve talked about how much I love Insecure before so you can imagine my joy that Issa Rae is currently back with Season 2.

Issa Dee is back in the dating game whilst struggling with her heartbreak over losing boyfriend Lawrence, after she cheated on him. Molly Carter (Yvonne Orji), her best friend and confidante is on hand to offer advice on how to ‘ho’ while also dealing with her own issues, namely the pay gap at work.

Special shout out to Issa’s white colleague Frieda (Lisa Joyce) as she tries to get her head around the black Principals’s open racism towards his Hispanic students – and Issa’s subsequent argument that they should let it go and focus on all the good they’ve achieved.

The Hound & Tormund, Game of Thrones

A selfish entry but it’s my blog so what? A special tribute to the Bromance developing between the mighty Tormund Giantsbane (Kristofer Hivju) and my man, The Hound (Rory McCann) as they take on the White Walkers and fight on the side of the King of the North.

Sure, the season finale is tonight (at the time of typing this) so it may be nipped in the bud before it ever gets going but for now it’s beautiful and pure. Two warriors on the same side, quietly admiring one another’s immense skillz. It has also gifted us this amazing video.

If loving these two brutes is wrong, I don’t want to be right. Right?

What are you digging this week?

One thought on “Weekly Digest #6”