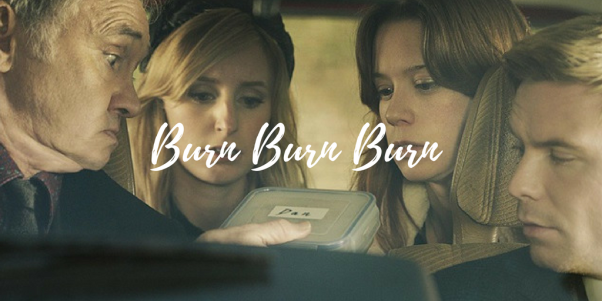 Jill’s pick and obviously this prompted rather a lot of daydreaming about going on a road trip together. How fun? The one in this film might be somewhat bittersweet but still, anywhere is good when you’ve got your best girlfriend by your side, right?

Following the death of their friend, two girls in their late twenties embark on a road trip to spread his ashes. Seph and Alex take turns driving. Dan is in the glove compartment, in tupperware, decreasing in volume as the trip progresses.

Dan has just died of cancer and his last wish is to have his two best friends, Seph and Alex (Laura Carmichael and Chloe Pirrie) scatter his ashes in several personal hotspots across the country. The girls must watch a video made just for them at every point to understand why each destination was important to him.

But as these plans are wont to do, things go array along the way and Dan may well have known this would happen, for it prompts the girls to face the aspects of their lives that are holding them back. For Seph it’s a relationship gone off the boil, while Alex’s relationship with her mother is damaged beyond repair (or is it?). There are other issues at the surface for Alex too, given she’s just caught her girlfriend doing it with someone else.

This is a good film that offers some really joyous moments. For instance, on one of their first nights on the road, Seph and Alex meet some fucking hippies who seem to offer them exactly what they need at the time. The following morning, however, the charming and inspirational couldn’t be more irritating and the pair do what any sensible people would do in the same situation (drive off as fast as their old banger will  carry them).

Somewhere near the end, Alex finds herself literally tied to the cross for an emotional confrontation with her best friend – and it’s hard not to find the whole set up surreal and amusing. I’m also a fan of the dialogue which is zippy and wise-cracking whilst also remaining convincing.

There are are decisions to made on the road, hearts to be broken for the greater good and truths to be told – all the while delivering on a promise to a dead loved one. It’s not an original premise but it is empowering and genuinely touching in places.

I really appreciate the chemistry between the two leads. I buy them as friends who sometimes fight ferociously and I want them to make it through. When they argued, I felt bad. When they were happy, I wanted to be in the car with them.

And when they delivered an old women in distress to her son in Scotland, like Alex, I wanted to text my own mother immediately. In fact, I did. I think this film is a good reminder of the few people we have in our lives that are actually worth putting the work in for.

3/5. Nice. Not amazing but good and confident and life-affirming.

Did my wife like this one? Would she take it on a road trip or scatter it in the bin? Find out here, now.