This month is May-hem Month (see what Jill did there?!) and we start off with quite the bang. I’m not sure if that’s in a good way either because I am still trying to work out what the fuck happened. So without further ado, let’s get down and dirty with our first May-hem pick!

A girl’s life cascades into chaos as everyone around her suffers a gruesome fate while she herself becomes less and less certain of who she is and what kind of a world she lives in. 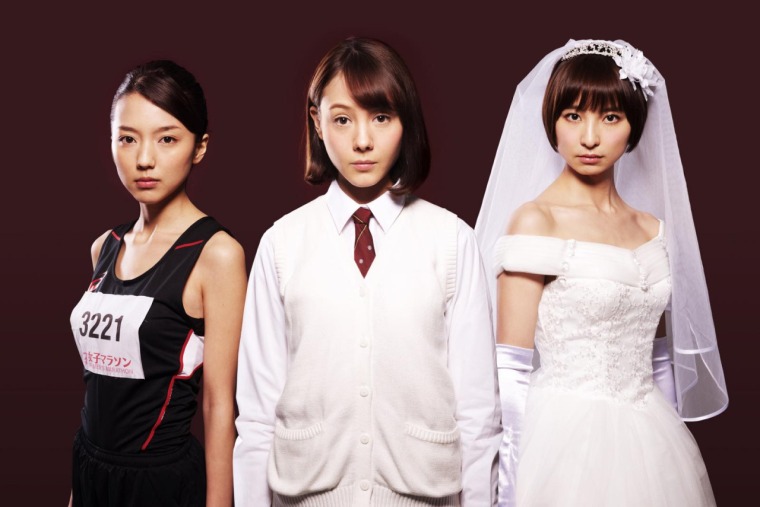 WTF was a common phrase running through my head as I watched this. I have little to no understanding of what happened which actually doesn’t matter that much as it adds to the general vibe of what our main character Mitsuko is going through. I’ll try my best to elaborate anyway.

Mitsuko (Reina Triendl) appears to be a sensitive soul, writing poetry and being less abrasive than her classmates (in short, there’s something special about her, bear that it mind). On a school trip, our heroine narrowly escapes a bloody and inexplicable fate. (Like the most creative death scene since Ghost Ship (2002) – it is immense!).

Dazed and confused but very much alive, Mitsuko immediately stumbles from the scene of the accident into a (different) school where her peers all seem to recognise her – but she’s got no clue if she’s a student there, who she is, who they are. Bemused by her sudden flakiness, her friends – Aki, Taeko and Sur – make her cut class and they all end up in the woods. Whilst there, Mitsuko outlines what happened on the bus (killer wind, sliced up bodies, all that jazz) – and puts it down to being a bad dream.

This leads to an existential discussion about parallel timelines and alternate worlds lead by Sur (short for ‘Surreal’) – who philosophises that to avoid a horrible fate and set the world back in motion, Misuko just has to do something completely unexpected (honestly, I got lost here but there is a giant crocodile dream sequence which is pretty glorious).

When the girls return to their classrooms, they are torn down by homicidal teachers with machine guns (and I thought Catholic school was heavy). All but Mitsuko are slaughtered where they stand. From here we flip and flop into an exploration of these alternate universes, as Mitsuko becomes Keiko and Izumi (played by different actresses so very confusing). Her alternates are a bride betrothed to a boar headed man (been there) and a marathon runner.

Mitsuko keeps on meeting the same group of girlfriends who are either friend or foe in these realities – but they generally end up killed in the most OTT ways imaginable. Always constant however is Aki, who pops up to support or gee up Mitsuko/Keiko/Izumi along the way. At one point she tells Mitsuko that she might be these other two characters in different lives but at the core she will always be Mitsuko.

Aki also explains to Mitsuko that in order to stop the cycle of all her friends being slaughtered in every reality, she needs to die. Later there’s a convoluted thread about all this being a computer game with Mitsuko as the main character, some stolen DNA and a sinister as all fuck shrine to all her dead classmates.

I guess the final point here is, will Mitsuko make the ultimate sacrifice to save her friends? 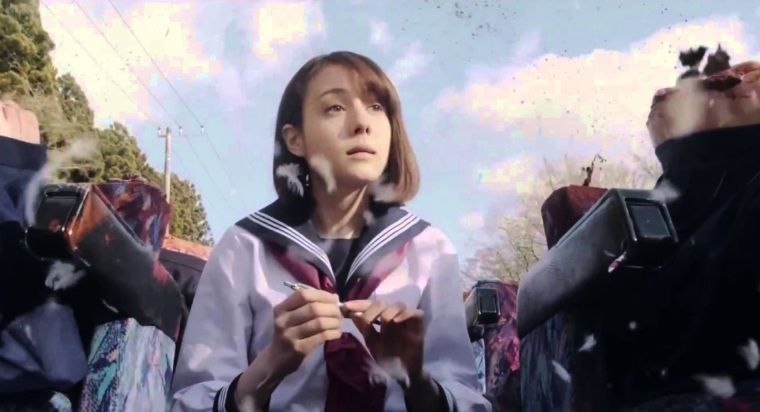 Apart from the gore there isn’t an awful lot to engage me here – which is ludicrous because on paper this is the most me film you can think of. However, I just didn’t connect with it at all. I loved the killings and the fantasy/horror element of everything but the plot is just too incoherent for me to keep up. I’ve read through the Wiki synopsis a few times and I’m still confuddled.

I do like what it’s supposedly saying about the ‘boys club’ and how everything is run by a bunch of sad and pervy little boys and I would have liked more of an exploration of that. It would have been amazing to have seen Mitsuko fuck up the patriarchy – but it is refreshing to watch a movie run by so many females.

In tone it reminds me of a film called The Machine Girl (2008) – which dials up the blood and goo but doesn’t deliver much else. Again, believe me I’m as surprised as anyone that this sub genre doesn’t seem to be for me.

What did Jill make of this one? Would she leave it outside in the killer wind or follow it through parallel universes for lyfe. Find out here.