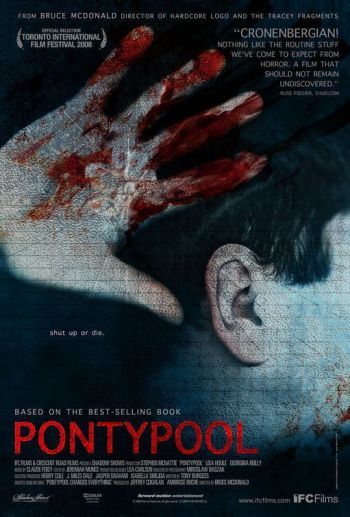 I thought I’d treat myself to a weekend of film and catching up on Transparent Season 3 because I’m a lazy toad like that. At least now I can pretend it’s ‘homework’ for the podcast whenever I feel like a binge sesh, it’s all material right?

I floated this for the Blog Collab but Jill had already reviewed it (read here). I was still interested though as it’s been on my Movie Bucket List for time so here we are.  I needed something to blog about today too.

IMDB Synopsis: A psychological thriller in which a deadly virus infects a small Ontario town.

Woowee! First off let me start by saying I want Grant Mazzy’s (McHattie) job – and voice. It’s like liquid amber, I’m telling you. And where exactly has this film been all my life?

Mazzy is a former shock jock now doing local radio with a small team including station manager Sydney Briar (Houle) and tech-assistant Laurel-Ann Drummond (Reilly). On the way to work in the middle of a blizzard, he encounters a distressed woman who disappears before he can help her.

A little shaken, Mazzy calls out for advice from his listeners about what he should of done. This is soon forgotten in the excitement of the morning however. Mazzy’s controversial style grates on the nerves of Sydney and she calls him up on it pretty frequently. This too falls by the wayside when they receive a call from their ‘helicopter’ reporter Ken (voice of Rick Roberts), who tells them about a riot coming from the office of a Dr. Mendez (Hrant Alianak).

Reluctant to break the news on air and a little wary that this might all be a hoax, the team tread water until Ken calls back from his hiding place inside a grain silo, where he clearly describes some freaky shit going down with the locals (limb tearing, cannibalism, the usual). His call is interrupted by a transmission in French that tells them the following: remain indoors, do not use terms of endearment, baby talk, rhetorical discourse, or the English language.

Things take a turn for the worse when three things happen. Mazzy has a funny turn and tries to leave the station to see what the fudge is going on for himself, and the gang witness a horde of crazed locals heading quickly their way. Then Laurel-Ann goes a bit loopy, first freezing on the spot and muttering the word ‘missing’ over and over, then acting violently towards herself (in an attempt to get to the others).

This coincides with the arrival of the aforementioned Dr. Mendez who crawls in via the basement and helps Mazzy and Sydney piece together the story (Clue: this virus is triggered by certain words to certain people).

I’m not messing with this one too much because it’s well worth a look but I will put a couple of questions to you because that’s how I do things round these parts, yo.

What will become of our (anti)hero and his station manager? What’s Dr. Mendez got to do with all this? Is Laurel-Ann alright? Will Grant Fucking Mazzy come up with a plan?

And I guess, what the fuck is going on, a linguistic zombie outbreak, for real?

I love this movie. Seriously. It really knows how to build suspense in the most subtle way. A lot of the reactions are conveyed on just one face (Mazzy’s) and it’s so effective. I love the character of Grant Mazzy, a shock jock who’s seen it all and can’t quite get his head around the madness. But once he does, he just gets down to business.

I really enjoyed this ride and had no idea what to expect. I found some of it quite touching, for example Laurel-Ann has such a hard time given that she’s been on tour to Afghanistan and hints at some PTSD. Cut the girl a break, yeah? And some of the Intel we get on what’s going on outside is heart-wrenching. You’ll see what I mean.

That said, it made me howl with laughter more than once. When Ken dies his off-the-cuff obituary, delivered by Sydney, isn’t of the traditional variety, put it that way.

Fun, fresh, satisfying and there’s a bonus after-credit scene that makes no sense whatsoever to me but is so Kill Bill it ain’t funny. It also offers shades of John Carpenter’s The Fog, which pleases me immensely. Think I’ll have to rewatch that one soon.

If you haven’t already, I recommend you watch Pontypool this Halloween, it’s a good ‘un.

My Rating: 5/5. Wish I hadn’t waited so long to see this, it’s a masterpiece. And I truly dig the concept, proof that words can hurt you, despite what the famous saying says.